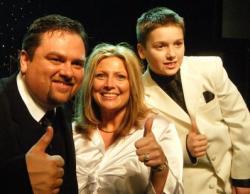 Michael Owens was born on an Air Force Base in Lakenheath, England but primarily grew up in Ohio. Owens attended some college at Wright State University. He then owned a cell phone and pager business and also ran a large insurance call center. In 2005, Owens attended a road show informational meeting hosted by Andy Albright and Barry Clarkson. During this meeting, Owens was told that NAA was on a mission to help American families. The presentations at this meeting convinced Owens that this was something he could believe in. He joined NAA in January of 2006. “National Agents Alliance has not only allowed me to be successful but also significant,” Owens said. “NAA has given me an opportunity to be successful in my lifetime both emotionally and financially, but more importantly, it has given me an opportunity to be significant to my children and for generations to continue.” “As Lou Holtz says, ‘Being successful ends the day you pass; it will only last one lifetime, but if ‘significant’ you will continue to help people long after you are gone. Significance lasts many lifetimes.’” Owens loves the “outrageous support system” he has with NAA. He said he enjoys the freedom that success with NAA has brought him. He attributes his success to the support he receives from the owners and agents, to books, and to the company’s leadership at all levels. “NAA has provided me with so much,” Owens said. “I have been able to travel the United States helping families while providing a financial future for my own family. More importantly, NAA has allowed my wife to stay home and be with our children ... and being a mother of five kids is a huge job.” Owens and his wife, Angie, have five sons: Josh, Billy, Logan and twins Jake and Cody. Owens advises new agents to follow the system, plug into everything and get as close as you can to your growing upline manager or team leader.

Our mission is to provide the best financial products with the kind of in-home, professional service that is second to none. Our operating credo is: "Your clients don't care how much you know until they know how much you care." We take a personal interest in each and every one of our clients. We believe that knowing our clients' wants and needs is the foundation to recommending the best financial strategies that will provide exactly what each client wants.